It's Time for Plain Talk 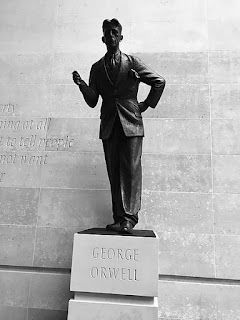 Statue of George Orwell outside BBC headquarters - the wall behind is inscribed
with the words "If liberty means anything at all, it means the right to tell people
what they do not want to hear," from his proposed preface to Animal Farm.
photo credit: Matt Brown-Wikimedia CCA-2.0 Generic, FlickereviewR 2


Augustus Saint-Gaudens, an American sculptor of the Beaux-Arts generation, once remarked that "...it's the way a thing's done that makes it right or wrong."

When it comes to public talk, I believe we're long overdue for some plain talk about what we should accept as right.

Too many public conversations now (obviously, tweets too) are just, well, unacceptable, wrong, off, or cringeworthy. Take your pick, or waste energy on expletives and likely you'll be closest to right.

Here, I'm not referring to comments like someone who described an opponent as "simply a shiver looking for a spine to run up." With variants tracing back to at least 1966, the endurance of this artful and possibly apt gibe might be welcome for many to hear (except the latest target).

Doublethink
No, what we need plain talk about is what George Orwell named "doublethink," and its close relative "doubletalk."

This is "a process of indoctrination whereby the subject is expected to accept as true that which is clearly false, or to simultaneously accept two mutually contradictory beliefs as correct, often in contravention to one's own memories or sense of reality." (Wikipedia)

Why then are there not more of us carrying out Orwell's urging to jeer "...loudly enough, [to] send some worn out and useless phrase--some...lump of verbal refuse...into the dustbin where it belongs."

Fact-checks
For example, there are good reasons to believe that fact-checking, as it's mostly done, is a fool's fantasy.

Firstly, once prejudices are established and continuously reinforced, including through the mail, media, or social media, the "tribe" will not believe criticism from any source about a tribal leader's corruption or malfeasance.

Secondly, it is clear that so-called fact-checking, or otherwise restating a message by repeating it (even in the negative), just reinforces the original propaganda.

Both the believers and the undecided will focus on the original false message and ignore that little word "NOT" or other negation that the fact checker inserts. The negative is as invisible as the cyclists whom car drivers genuinely don't see on the road.

To Counter
There are right ways to counter the emergence of the ideological offspring of Joseph Goebbels and Leni Riefenstahl. These include:-

1. Ignore any verbal refuse designed to distract, deny, or delay - by all means, counter with the truth but, please, oh please, stop repeating the words of the original--you're just being a megaphone for what you oppose.

2. Listen up, friends in the media, there's not much that a bad actor fears more than being ignored--at the very least, please: stop using or repeating a bad actor's name; stop repeating direct quotes in the lower thirds of the television screen; and, stop showing "B-Roll" of a bad actor, instead of doing your job to paraphrase any comments, if needed at all.

2. Encourage leaks of sensitive information that expose lies and fraud.

3. Reverse any serious lie right back onto the liar--use words more like the graffiti artist who sprays a mustache, beard, or horns onto a propaganda poster.

Finally, if you believe you can win doing it right, and you put in the effort to communicate vigorously and well, you will win.
at June 25, 2020 2 comments: