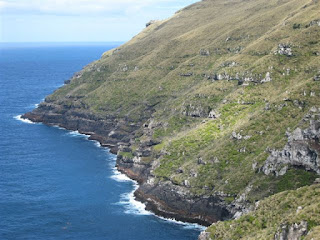 Joan Druett in Island of the Lost [here] brings to life the character of people who, sailing into forbidding seas, were shipwrecked on a remote island 285 miles to the south of New Zealand. She recounts how two groups deal with deprivation at the "edge of the world" in the year 1864--as current today as then.

The tales reveal the best and most base in humanity--starkly contrasting adaptability and rigidity in the respective leaders of the groups. One group showed courage in selfless acts too many to know, a flexibility in fighting overwhelming forces, and a determination to survive--qualities largely lacking in the second group.

Part history and part immersion in human nature, the author finds her stride early to bring to life the events and voices of the individuals, through her carefully creative interpretation of journals and other research. She relates the true tales of two groups, who were castaway and unaware of each other's existence, at different ends of the same island. Each took a different approach to making decisions and to finding shelter or food--with consequently different outcomes.

Powerful recreations of ships, sea, storms, islands, vegetation, sea lions, bird-life, and other creatures are described in graphic detail, along with the cruelty needed to survive. Druett melds seamlessly the records of events within descriptions of the island setting, to illustrate how the castaways cope, insightfully sharing the thoughts and actions of people facing extreme challenges to their lives.

The smaller group of castaways celebrate human savvy in undertaking hard efforts, using limited tools retrieved from their shipwreck--foraging for food, building shelter, and sustaining spirits. As leader of this group, Captain Musgrave provides encouragement, requiring times of relaxation as needed. He seems as a leader to appreciate when to lean in with guidance and when to cheer initiative. For 18-months, Captain Musgrave and his group withstood the isolation and deprivation through adaptation, ingenuity, and cooperative efforts.

A larger group of castaways, who were shipwrecked four months after Musgrave's group, fared much less well. Their tale, as one reviewer remarked, was in some ways like an adult version of Lord of the Flies. From their shipwreck at the foot of cliffs through later events, this group's lethargic treks and decisions too late or not at all accumulate failure after failure in taking the actions needed for survival. With the low energy and inflexibility of this second group and its official leader, you can broadly predict why their tale would be so different--with just one seaman having the resourcefulness needed to face such dire circumstances.

The detail of the narration is engaging. The book also describes norms of master-servant relations of the time, notes the behaviors of government officials, and chronicles some subsequent history of this "graveyard for ships." Lessons emerge naturally from the recreation of a distant time, in a far-away place, through deftly reimagined conversations and events that are freshly relevant today.

When the world waits and watches from elsewhere, tales of survival offer possibility for hope. But they also highlight the limits to being able to survive alone.