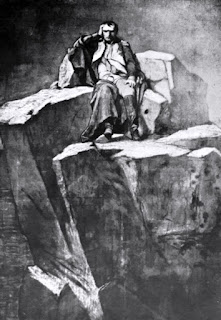 Napoleon in Exile at St Helena
by Helen Leah Reed. This image is in the Public Domain {{PD-US-expired}}

Much like family, we don't usually get to pick our neighbors. Pleasant times spent with a neighbor chatting and sharing stories, drinks, or a meal provide a sense of belonging, security, and peace of mind within immediate and familiar surroundings--extending the valued bubble of comfort and security of home that anyone should be able to expect.

Some neighbors become life-long friends. Some take on the care of houseplants or pets when we travel. Looking out for each other and caring about someone else are good qualities in folks we'd call good neighbors.

Of course, in different ways tough on everyone are those neighbors only interested in themselves. Least troublesome are the ones who keep to themselves. But the one or two who dispute the fence-line, push too much, or make a lot of noise or worse are the flip-side.

More widely in the world they're often mocked or illustrated as ridiculous but dangerous, frighteningly real compared to the cartoon characters their actions prompt.

I recall a Donald Duck cartoon strip in which Donald got his feathers so greatly in a flap with his neighbor that they each frantically built fences higher and higher on their adjacent fence-line, to outdo each other.

Eventually, the fences were many times higher than their homes, bending and swaying from the height of the fences that Donald and his neighbor were atop and still building, when the cartoonist summoned a tornado to whisk both fences away onto a nearby body of water--there to serve as life-rafts for passengers escaping a ferry that was overturned by the same tornado--such is the power of the cartoonist's pen to find a good ending to madness.

The longer that dangerous actions are allowed, the greater the harm for everyone.

at February 21, 2022 No comments:
Email ThisBlogThis!Share to TwitterShare to FacebookShare to Pinterest 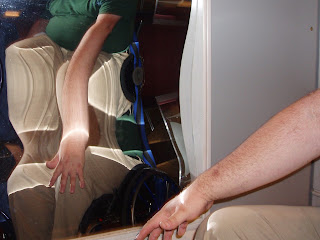 Wirkung eines Zerrspeigels
by Xocolatl. This image is in the Public Domain.

It's all done with mirrors. A once-famous columnist for a still-famous newspaper probably had this saying in mind when he speculated more than half a century ago about writing the ideal all-purpose political speech--by appealing to anyone who's committed to any side of just about any issue. He went further to write, tongue-in-cheek I hope, his own best effort toward earning "the supreme accolade: 'Nobody can quarrel with that.'"

It's worrisome that he was also a presidential speechwriter for five years in an administration not noted for covering itself in glory. While the columnist's name might not matter any more, the sentiment does, whether or not the original motivation was mainly comic. The columnist proffered that the way to earn the "supreme accolade" was to craft words that permitted political candidates "to take firm stands on all sides of every issue." What's happened to political language since elevates this cheeky comment to seriously worrisome.

We all long ago let ourselves get used to propaganda washing over us every day in every way. Perhaps it's not surprising that, for too many decades in this country, some generators of political language have borrowed and "improved" the techniques that Madison Avenue found sufficiently useful to convince us to buy not this but that soap, toothpaste, food, car, college, or you-name-it.

As expressed in the spirit of the original remarkably pseudo-scientific gibberish, these advertising techniques were built on "measuring subjects' reactions to messages." In the 1950s, this was done by observing eye dilations and other physiological reactions to "messages"--methods that long ago found their way into politics, with the aim of delivering more certainty in the effect of words.

So-called research data are now gathered from electrodes on potential voters who listen to political speeches, to determine the "right words" for the use of these words uniformly in talking points across a political party, which makes addressing people's real needs irrelevant--with too many in the media then repeating the juicy parts of the talking points verbatim! Anyone who doesn't think this cringeworthy and wrong on so many levels has a long way to climb back to decent human values.

The easier propagandists to call out are those who say the outright opposite of what they do. But these still seem to attract more media attention for what is said rather than done--maybe because the lie is more colorful and comes pre-packaged in a media release. Hyperbole or even mild exaggeration combined with provocative ambiguity is a headline-writer's dream, whether connected to reality or not.

More challenging is the conjurer of euphemism or maestro of the mealy-mouthed, especially those urging politicians to talk to us about "security," "peace of mind," "results," "renewal," "independence," and a litany of words being promoted into conversational currency, without the matching actions to accomplish laudable ideals. Such as "transparency" or better still "accountability" for example! Now, these sound like promising thoughts--and is it too much to ask that the legislators, judiciary, and others, who've sworn real oaths to do so, actually take the steps needed to "secure our peace of mind by getting a result of some accountability, to deliver a renewal of democracy and individual independence"--at more than buggy-speed in a nano-world!? The come-ons and put-offs become encyclopedic, as the news cycle moves on.

As messages are being shaped and shared for yet another election, it's a good time to see the hucksters for who they are. Just like the about-to-be-bankrupt person in business projects confidence, even bombast, to reassure an unfortunate target to invest in a yet-again just-wonderful opportunity, so too will the political propagandist.

Waking to every day's news that includes some fearfully absurd figures, it's a time to look for what's real behind the images. Computerized propaganda has just kept improving its targeting too. And foreign state-sponsored efforts remain. So, here are some suggested rules-of-thumb to take action on, after reaching for a second cup of coffee each morning during the coming months:

2. Find people in your neighborhood or circle of friends and relatives, of whatever party affiliation, who believe in democracy--put aside differences, and form a coalition of ongoing-working-consultation to take actions to strengthen democracy together--and count on doing this for a long while.

3. Laugh at and/or stand up to the puffed-up and self-opinionated autocrat, whether local or (if you're able) international.

4. Write a letter (not a tweet) to your elected representatives, requesting action on something you care about, asking for and expecting a reply, and following up if you don't get one, until you do get a satisfactory (not mealy-mouthed) reply.

5. Recognize grift-language--if it really seems to be everywhere, ignore it if it looks harmless enough for now, and call it out when it's not.

6. Secure a funhouse mirror (by analogy) to hold up and show to others, yes anyone who'll listen, just how distorted and far from the common good of normalcy that the words and actions of autocrats travel.

Tearing down grifters and their propaganda requires more than occasionally switching off the media and tech devices, although this might help gain some perspective.

Most seriously, any of us needs to take time to hold up a mirror to propaganda, to make out what's real, past the reverse/distorted images--like we do with a funhouse mirror at the sideshow, to look for the reality that's being distorted.

Not that all of this will be possible or always work, but reinforcing critical inquiry and informed challenge will prove way better than bathing every day in the distortions of people whom you'd not otherwise open your door to.

And, if enough of us believe in doing good within democracy, and communicate well, democracy will thrive.