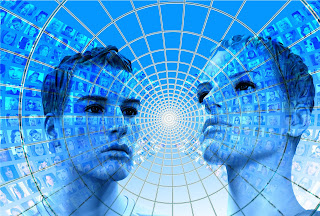 Social media
by Gerd Altmann is licensed under Pixabay

When Common Sense was first published, it was read aloud in taverns and meeting places. This was in the emotion-charged time of early 1776, prior to the signing of the Declaration of Independence. Some in the yet to be United States were ambivalent about whether to "reconcile" with England. The pamphlet is impassioned and powerful, though not an easy read in certain passages for a modern reader.

Yet it remains one of the best-selling publications in the United States. The then anonymous author Thomas Paine noted in a postscript to the Introduction that his identity was "wholly unnecessary... [except] ...That he is unconnected with any Party, and under no sort of Influence public or private, but the influence of reason and principle."

Paine advocates specific steps for needed action, drawing on both intuition and reason. Many of his comments remain pertinent. Take, for example, his conclusion: "Let the names of Whig and Tory be extinct; and let not other be heard among us, than those of a GOOD CITIZEN, AN OPEN AND RESOLUTE FRIEND, AND A VIRTUOUS SUPPORTER OF THE RIGHTS OF [HU]MANKIND AND OF THE FREE AND INDEPENDANT [sic] STATES OF AMERICA."

Centrally, the pamphlet makes a powerful condemnation of autocracy, specifically targeted at the King of England. But the key criticisms pertain to autocrats anywhere, anytime. Common to autocrats, then and now, is insatiable self-interest. And like any empty vessel, an autocrat will make the most noise, propping up partisan posturing to divert attention from real concerns.

If you'd like to push back on the meandering nonsense autocrats use to intimidate and control, there are some thoughtful guides available. One is the book How to Stand Up to a Dictator by Maria Ressa, who was awarded the Nobel Peace Prize, at least partly in recognition of her effective efforts to stand up to then President Duterte in the Philippines.

The book exposes the underbelly of intimidation typically employed by an autocratic regime against individuals who advocate basic freedoms. Most valuably, Ressa provides a compelling recap on her lessons learned, along with steps that she and her team take to fight back and survive. Much of what she describes to deal with autocracy's weaponization of the news, social media, the law, and education is applicable to efforts needed worldwide to strengthen democracy.

The book brings together personal and professional understandings. Ressa shapes workable wisdoms from life experiences to guide her actions. She describes a desire early in life, "...to know myself to such a degree that I could take myself out of the equation when approaching the world around me and responding to it. That is clarity–the ability to remove your self and your ego." Just some lessons distilled from her professional experiences are "...we couldn't stay quiet because silence is consent. ...don't let anyone else tell your story...," or "Free speech is being used to stifle free speech," or "Every day of inaction is a day of injustice...," or "My hope is that others can replicate our three pillars: technology, journalism, and community to fight back and build forward."

And she details how to uncover and address autocrats' manipulation of social media, sharing plans and the actions she takes to check if not checkmate a dictator. More than interesting and compelling, Ressa outlines much to put into action.

She doesn't only detail how social media use us. She also outlines how anyone determined to strengthen democracy can, with some planning, support, and savvy, turn social media against the pseudo-populist actions of autocrats. On this point, she advises that, "If your nation has elections coming up, organize your #FactsFirst pyramid a year earlier. The very minimum is six months." Ressa describes how to do this. Hers is a unique and transferrable story of how to "...fight for our future." Not easy, but very doable by people committed to do the work needed to assure a better future.

Another book–an even more personal guide–is the widely-known On Tyranny by Timothy Snyder. He draws on the rear-vision-mirror of history, to anticipate and tackle the ruinous rants of contemporary tyrants in our midst.

While revealing the reality behind the masks that tyrants use, Snyder's major contribution in this simple and short work is to offer twenty useful actions. These are his distillations of "twenty lessons from the twentieth century," to help keep perspective and be prepared.

From his initial advice not to obey in advance, through some down-to-earth personal suggestions for preserving truth, to getting prepared to deal with the worst outcomes, he provides a pocket-guide to deal with deniers of freedom. Some samples are "Power wants your body softening in your chair and your emotions dissipating on the screen. Get outside," or "Be angry about the treacherous use of patriotic vocabulary," or "Set a good example of what America means for the generations to come. They will need it."

For anyone who cares about strengthening democracy, these publications and any others that are as clear about needed actions are worth checking out. You can expect them to be more use than the repetitive outrages amplified by social and mass media, or the morass of stories focusing on grifters, crime, and violence that dominate video entertainment and so-called news.

Being continuously bathed with sensation-seeking, polemical echoes from empty vessels has limits. It's time for each of us to find a better way to require better. And to engage the talent, creativity, and drive of new generations to do the same. What more will you do?

Thomas Paine (1997), Common Sense: Of the Origin and Design of Government in General. With Concise Remarks on the English Constitution, Mineola, NY: Dover [first published 1776]

Maria Ressa (2022), How to Stand Up to a Dictator: The Fight for Our Future, New York: Harper Collins