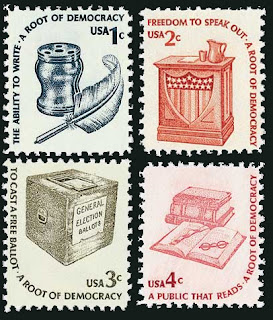 Roots of Democracy
First four Americana stamps, the 1977 Americana Series
by United States Postal Service. This image is in the Public Domain {{PD-USGov}}

"Safety from external danger is the most powerful director of national conduct. Even the ardent love of liberty will, after a time, give way to its dictates."

Regardless of such wisdom, it was for much too long that otherwise sensible people slept through Churchill's alerts to the danger of tyrants, less than a century ago. Who will neuter the propaganda weapon of today's wannabe-tyrants, foreign or domestic?

If the legal profession's clichéd explanation that shouting "Fire" in a crowded movie theater is not acceptable, how is it that propaganda threatening democracy is? Is propaganda rightly protected speech?

At the very least, we need progress to prosecute propagandists driving "schemes and artifices" for mail or wire fraud, or perjury, or defamation, or any other actionable threat I'm not thinking of. When gaming the rule of law is the rule of play, will rational problem-solvers-at-law ever advance actions at a speed to meet the need?

With bizarre mirages of propagandists filling the airwaves, some more bright lights are needed in the media to counter what's wildly opposite to reality. The mirages of crazies are certainly not diverted by media amplifications of them.

Perhaps one day, we'll again encounter worthwhile puzzles, instead of addressing how so many people can believe the unbelievable. And maybe it's time to stop looking at hucksters as if they operate by the norms of normal people. To defeat a twisted mind, we don't need to be twisted, but we'd better be able to project the next move, and get ahead of it.

Some individuals spend a lifetime's energy on coming up with distorted talk to smooth over distorted actions. Savvy people get this, and have a nose to detect the grifter and pretender. Even household pets might be inspiration here--they've retained senses to detect looming danger.

How much longer are we all to stand for glacial movements toward potential accountability? Sustaining democracy requires the wide-awake actions of "we the people."