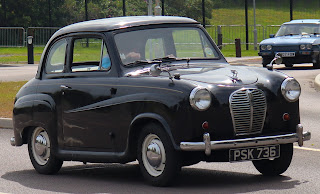 Studying criminal law way back when, a required class assignment was to provide a full report on a court proceeding. Finding a case to audit was probably part of the test, since this required locating the right noticeboard in the old courthouse downtown, firstly to choose from the list of hearings for the day, then to navigate the musty corridors of the old courthouse building, to be in the right place at the right time. And, this also turned out to be an early and unexpected experience of humor-in-law, before television audiences enjoyed the now dated but legendary British comedy series, Rumpole of the Bailey.

The case I happened to choose was the preliminary hearing of three accused men, caught after a bank robbery gone wrong. The getaway car was an Austin A30, well-known in British Commonwealth countries at the time as an old family sedan, commonly referred to as a "baby Austin," not noted for speed.

The tip-off to the arresting police was the car's license plate on the rear of the car, observed to be dangling vertically, just held by one shoe-lace; with the second shoe-lace that had kept this license plate horizontal and in place no longer visible, having surrendered its duty somewhere in the hurly-burly of getting away from the bank.

Revealed to the police, firmly-affixed, horizontal, and easily read underneath was the original license plate of this stolen car. So, the police pulled the baby Austin to the side of the road on suspicion, and the jig was up when pistols and canvas bags of bank money were sighted.

With these facts, like a scene from Gilbert and Sullivan or another farce, it only occasionally gets any better when studying law! Not sure how the presiding magistrate kept a straight face as the prosecutor outlined each piece of evidence.

Equally remarkable was the dialog that occurred during recesses in the morning's proceedings, when the magistrate was not present. The police prosecutor and the accused men evidenced almost back-slapping "friendliness," apparently well-known to each other, with other police in the courtroom smiling discretely, appreciating these exchanges. Unsurprisingly, the prosecutor was optimistic about bringing a case to finally secure the three accused for a time, at Her Majesty's pleasure.

The defense lawyer was more braggadocious in retelling, to anyone who'd listen, tit-bits of conversations he'd had with his clients during their dinners at his home; he was a big talker, combining poor dress sense with a diamond ring on one hand, and with a slickness just a touch akin to the character of the lawyer, Vinny, in the movie My Cousin Vinny. Yet he lacked most of the smarts of the movie lawyer.

After these proceedings, I didn't track the outcome of the trial or any appeals; time to follow that progress was required for other assignments and, in those days, would also have required continuous checking of the right noticeboard in the courthouse; but it didn't look too promising for the three accused men during this preliminary hearing, which resulted in a clear case to answer.

Updating to the present in the United States, some of the more than 500 cases in progress against the January 6 terrorists at the Capitol present facts strangely similar. The terrorists' plans were large, but disconnected, and flawed enough in execution to permit over 300 million Americans to dodge, for now, the intended result of some 9,000 terrorists, who injured about 140 police while attempting to violently overturn democratic government. Many behaviors of the terrorists were as bizarre and darkly comedic as those of the bank robbers.

Of course, anyone facing armed attackers, whether bank robbers or terrorists, with life put at risk, sees no humor. Bizarre as these events look in the rear-view mirror, they're a stark reminder of the importance to anticipate, pursue, and prosecute criminals soonest and well.

Dumb luck is a fickle ally.