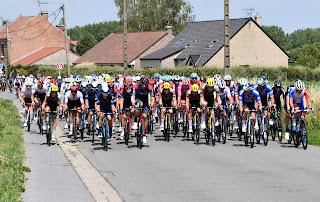 Le Tour 2022 commenced less than a week ago. Followers and fans on television or along roadways of the route will inhale a spectacle of cycling for more than a couple of weeks yet. Each nuance of tactic, tragedy, and triumph will be a shared experience.

For many years, veteran commentators Phil Liggett and the late Paul Sherwen personified the cyclists as "dancing on the pedals" or "reaching into a suitcase of courage"--their words immortalizing the human struggle that's played out on the race route through the European landscapes of villages, architecture, ancient and newer cities, mountains, and bucolic countryside.

Le Tour puts a spotlight on fitness, endurance, courage, skill, ingenuity, competition, cooperation, camaraderie, and more, while sharing a fascination of human beings with visual spectacle. We can all recall scenes or occasions that capture our attention or imagination. Many remain sharply in our memory. It's a natural inclination of human beings to think visually.

What catches attention or what we think important (visually or otherwise) we'll even say is "top of mind" or "front of mind." It might be our very own "red, red rose" or "road not taken" that will take shape as the image we see, but it will be a red rose or a road.

We frequently use the visual power of a variety of words for readers and listeners to see people, creatures, actions, places, objects, colors, shapes, events, processes, concepts, and other "stuff" not on this list. And the visual words we choose can also infer how we think about or experience other senses.

Each time the leading teams of cyclists and the peloton whisk along their winding pathways of history, I recall the fortresses on hilltops across France, blown up on Richelieu's orders to centralize the power of the monarchy, through to 160 years later "the mob tearing down, stone by stone, the hated fortress-prison at what remains in today's Paris as the name, Place de la Bastille"--bookmarking the beginnings and the close of France's literary Golden Age of the Enlightenment, and the foundation of the Republic.

Each year Le Tour emerges on the calendar as three weeks of anticipated spectacle, and provides a visual experience that reliably "floods memory" with the significance of France's contributions to western civilization--especially the evolution of a worldwide commitment of free peoples to give expression to Liberté, égalité, and fraternité.