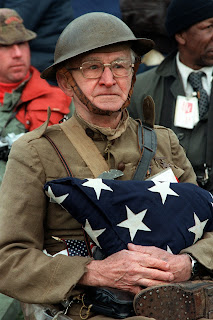 World War I veteran Joseph Ambrose, 86
Vietnam Veterans Memorial in 1982
by Mickey Sanborn, Department of Defense, National Archives.
This image is in the Public Domain {{PD-USGov-Military}}

United through invisible links stronger than titanium are people who live in genuine democracies worldwide. Regardless of local or national differences, consistently valued is the appreciation of freedom.

At certain times of the year, at home, school, or workplace, we pay tribute to all who have saved so many countries from tyranny. We pause in memory of the veterans who served, so that we live free; and we experience again the truth that sanity may rule, when tyrants don't.

This year at 11 am, on the eleventh day of the eleventh month, the "complete suspension of all our normal activities" to observe two-minutes of silence felt specially significant, with remembrance genuinely reaffirmed at the national level.

Likewise, much appreciated from across the miles was a friend's email with spectacular photos attached of poppies projected onto the shell-like sails of the Sydney Opera House. [here]

The email referred also to what Country Life in the UK has described as "a mammoth new work recounting the First World War, week by week... a rich tapestry of courage, camaraderie and love." The four-volume publication titled As We Were, at over 2,200 pages by David Hargreaves and Margaret-Louise O'Keeffe, reminds of the pain, dignity, and contradictions of a war that was touted to end all wars. This work is well reviewed by David Crane in The Spectator, 27 February 2021. [here]

The huge loss and efforts in 20th century wars especially, along with the losses and sacrifices of veterans in too many wars since, link us in a legacy of commitment to sustain freedoms of thought, speech, and association--within democracies. Lest we forget.

at November 15, 2021 No comments:
Email ThisBlogThis!Share to TwitterShare to FacebookShare to Pinterest 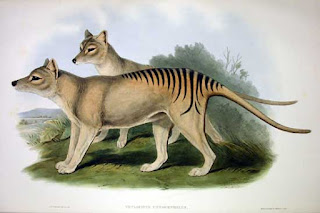