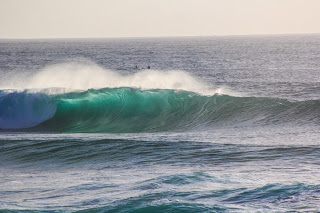 Kawana, Australia
by Finnrussell99 is licensed under CCA-SA-4.0 International
New Year for a couple of decades marked the final stage of three-weeks at the beach when growing up. Apart from a few seasonal celebrations, visits with relatives or friends, and some movies, this annual vacation was a time of uninterrupted surfing, of both waves and words.
Early every morning in a land of endless summer, the family carried beach umbrella, rolled-up beach mat, towels, boogie boards, sunglasses, sunscreen, drink-containers, and of course books, to trek in caravan formation across sand-hills and the already hot beach sand--to find just the right spot, between the flags placed by the lifesavers to mark the area safe for swimming.
The morning was spent in the surf--after a quick survey of what the previous night's tides and weather had set as the surfing terrain, to make safe navigation across any deep gutters, rip-currents, or sandbars--out far, to where serious waves gathered--there to catch a deeply rolling swell the long distance to shore, riding on its final curl and roll onward to the beach.
Swimming with the swell to catch a wave more than two-to-three-times one's height was learned early, for an exhilarating ride as close as you'd hope to the beach. Sometimes, misjudged timing delivered an additional lesson as a human cork, tumbling in the wave or hitting the sand hard, with eyes wide open underwater, shrouded with flurries of white bubbles and sand clouds, until breaking the surface for air. Eventually we'd come back to the beach umbrella and outspread towels, talking and reading, until returning home for lunch.
During the long hot afternoons, in separate places--indoors, under trees, or in the sand-hills, lots of reading revealed more than the year's schooling about how words work. Being carried along by words for the afternoon was different but in some ways similar to the morning's experience riding the waves.
Even from everyday Aussie talk, we were well primed to be curious about exploring language, often encountering analogy, rhyming substitutions, abbreviation, imaginative omission, and lots of figurative language. Not everywhere in the world will you hear the phrase "like a lizard drinking" with everyone around you understanding this translates to "busy"--because a lizard lies "flat out" busily drinking at the billabong... and it's commonly known that a billabong is a particular type of watering hole and not a surfing reference, despite the confusion created by this now also being a popular brand-name for surfing gear and clothing.
Or, how many people do you know who, out of the blue, refer to a best friend and/or spouse as "china plate," or just "china," or "plate"? Of course, Cockneys and Aussies know what this is because there's a rhyme with "mate," and everyone knows what that means, right! These are some of what are better known among quite a large trove of Australian/"Oz-talk"--now, that's "clear as mud" you might say, but will you routinely put these and many more language adaptations and adoptions, one after another continuously in every sentence you speak? No wonder that John O'Grady, writing under his pseudonym Nino Culotta, sold so many copies of They're a Weird Mob--a 1957 comic novel about an Italian immigrant to Oz trying to work all this out. And, then there's Frank Hardy's irreverently humorous satire The Outcasts of Foolgarah--which would require too many blogposts to translate from Oz-talk, however imprecisely.
Later, it was kind of surprising to find thoughtful authors, mainly from Europe or North America, who bothered to write entire books about tropes, rhetorical style, slang, or colorful language. Mostly these authors were interested in how words are used differently in different places, or for different purposes. It didn't take long to catch curiosity about how we shape words and words shape us--which also primed curiosity about how a writer like Dylan Thomas opened a path to sounds, sights, and insights [here in 5 minutes, "Poem in October" and "In My Craft or Sullen Art," read by the poet]. Or, of his walk in winter Quite Early One Morning, describing a seaside Welsh village and its people waking to another day [here in less than 13 minutes], as he makes intriguing entrances to unfamiliar scenes and feelings, via his unique rhythm, symbols, and density of lyrical language.
Then Charles Darwin describing human origins in language attentive to his wife's deeply different faith, to an eye-opening James Baldwin telling it on the mountain, to "Rabbie" Burns's reshaping songs and stories of Scotland, to Judith Wright visualizing the Australian bush, to Halldor Laxness's vision of independence, to the wit of Wislawa Szymborska, and so many other worlds of words.
Along the way, seeds from the thoughtful authors on rhetoric and language style progressively grew further curiosity--so it continues--recently and enjoyably, with much thanks to a friend, who pointed out yet another thoughtful author known on his weblog as The Inky Fool. This is Mark Forsyth, who dives into, if you'll allow the metaphor, oceans of words... and, who seems to have way too much fun with explanations of etymology, syntax, semantics, and rhetoric.
For anyone even a little interested in stretching understandings of what words can do, Mr. Forsyth, with an energy worthy of a surfer, dives into allusion, Diacope, and other examples of rhetorical style, to explain how apparently everyday language in movies or songs, or other word experiences, manage to carry us along.
If this is the nearest that a lexicographer comes in an armchair to surfing waves of words, good luck to us all. You can join in, and hopefully enjoy starting the year with one of his videos... here
Happy New Year.
at January 01, 2022 No comments:
Email ThisBlogThis!Share to TwitterShare to FacebookShare to Pinterest
Newer Posts Older Posts Home
Subscribe to: Posts (Atom)