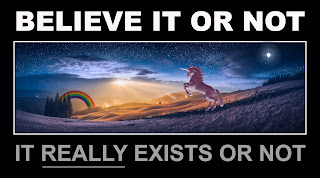 The meeting of day and night
in a mountain valley with invisible pink unicorn
by Vian, modified by Robin A Smile, is licensed under CCA-SA 4.0 International
Most attributed to the philosopher Immanuel Kant are rules for happiness: something to do; someone to love; and something to hope for.
It's helpful to keep these rules nearby when wading into Peter Pomerantsev's Adventures in the War Against Reality, which is the subtitle of his book This Is NOT Propaganda. The front cover to my copy of the book projects optimism, with its rainbow, unicorn, and some praise in words listed from reviews. Best be prepared though that, intriguing and lively as the narration is, this well-written scrutiny of 21st century agents of "doublespeak" probably won't cheer you up–it details the activities of people whom George Orwell had warned us to expect, back in 1949.
The author provides an update that such "doublespeak" agents are now very real, and very many--to an extent that most of our nearest friends, family, and neighbors might prefer not to know. And these characters, whose stories he tells, seem committed to "do something" day-and-night to make the world a lesser place. They are preoccupied with Kant's first rule. If they'd ever heard of his other rules, their concern would be solely from the point of view of narcissism.
Too much like the fictional folks of a South-East Asian bot farm that was featured in the television series, The Bureau, the real people in this book mostly display immorality of the amoral. The book starts with a well-written narrative of some earlier times [spoiler detail averted], as context for the even more disturbing recent past and the present. Both the early narrative and the outlines of more recent times are chilling insight into the post-fact world that propagandists continue to create, which they'd like us all to live in.
So, yes, as yet another warning, the book lives up to the effusive claim of the reviewers. It is "frightening." Additionally, since this book was written, our real-life challenges are larger–even medical groups now feel obliged to send messages they call "unprecedented," politely asking their patients to be nice...as well as warning that rude communication, unreasonable demands of medical staff, inappropriate language, and making threats will not be tolerated.
We're well along the path of the unacceptable in society when abuse against health care workers from patients has reached such a level that it stimulates this request. This is just one of the signals that the long-gestated plans of autocrats, who continue to refine and execute many of the systems of propaganda that contribute polarization and dysfunction throughout the world, are reaching totally unacceptable levels of penetration.
Where are the counter-discussions and actions that might bring improvement to the mess made by propagandists and some other forces exploiting democracy? In the last 27 pages of the book, the author of This is NOT Propaganda provides a few glimmers of hope along the lines of Kant's third rule.
Might we hope that journalism schools or, increasingly, practicing journalists will devote some considerable effort to the "constructive news" practices that he mentions? This is an approach that has been around for a while. Instead of "merely 'balancing' one set of opinions against another ...[the constructive news approach tries]... to find practical solutions to the challenges which face its audience, forcing politicians to make evidence-based proposals, which one could then evaluate over time, pegging their words back to reality..." [Peter Pomerantsev (2019), This Is NOT Propaganda, London: Faber and Faber, p. 239]
But, to counter the mono-thinking and certainty claims of autocrats, much more is also needed. We face one of the most critical periods of history, in which, more than ever, vigorous efforts are needed to offset propagandists.
Hats off to the ongoing efforts in education to illuminate propaganda by developing the ability in next generations to criticize what's going on, and hopefully take actions needed to do better by everyone. We all owe an enormous debt to decades-long efforts of insightful educationalists–too many to list here.
Of particular note are Randal Marlin, whose Propaganda and the Ethics of Persuasion remains such a valued classic, and Garth S. Jowett/Victoria O'Donnell, whose thorough text Propaganda & Persuasion is soon going to its eighth edition. Additionally, thanks go to Nancy Snow for her many contributions, including her highlighting the role of public diplomacy, as well as to J. Michael Sproule's scholarly clarity on various facets of propaganda, while recommending, as he might say, the pleasures of toil in the vineyards of propaganda.
Continuing efforts are important to sustain understandings beyond such key efforts as the Institute of Propaganda Analysis, founded in 1937 by Edward A. Filene and Clyde R. Miller, as well as the insightful landmark Propaganda, published by Jacques Ellul in 1962.
Once you've read This is NOT Propaganda, or other warnings concerning the propaganda morass surrounding us all, the question remains, beyond the diagnoses and warnings, what more will you do to help offset these propagandists, who continue to white-ant both our reality and democracy?!
at July 25, 2022 No comments:
Email ThisBlogThis!Share to TwitterShare to FacebookShare to Pinterest
Newer Posts Older Posts Home
Subscribe to: Posts (Atom)