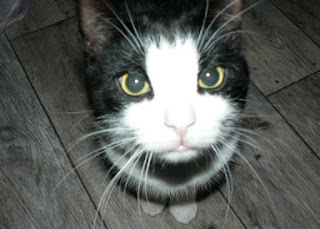 Black and white cat
by Rosendahl, This image is in the Public Domain.

Germaine Greer described herself during an Address to the National Press Club of Washington DC, on 18 May 1971, as a "media freak." Her comments were certainly catnip for the media. She was promoting her just released book The Female Eunuch. Yes, now about half a century ago.

She urged women to invent new ways to deal with the truly violent man. Rather than learning karate, she pointed out that karate or other rule-based reactions don't work against the genuinely violent.

Greer shrewdly observed that the genuinely violent doesn't muck about with Marquess of Queensberry rules; rather he uses "a broken bottle, a wheel brace, a tire lever or an axe. He does not see the fight through, but seeks to end it quickly by doing as much harm as he can as soon as he can," she said.

Any of us observing the genuinely amoral might get the analogy. Whether you are dealing with an amoral person physically or otherwise, it's best to know that the norms of karate or boxing or equivalent conventional rule-based schema don't apply.

When your opponent lacks stability and is obsessed with self-preservation, these character flaws function like catnip. You might get opportunity for just one response. And, you better hit the right spot so to speak; per another sporting analogy, you better not be counting on a "Hail Mary."

To reframe this as a fable: A cat will lay in wait sometimes for days observing the patterns of one scurrying mouse. Put catnip into the mix and all semblance of rules leave the scene. So maybe it will help to think of your genuinely amoral, not stable opponent as being about as predictable as a big cat on catnip. How will you deal with this, without being able to count on the equivalent of Animal Control?

As Aesop might say: The true leader proves him/herself by his/her qualities.