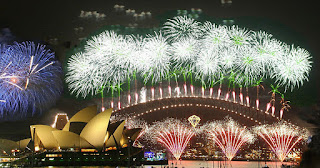 Sydney Fireworks, New Year
photo credit: Rob Chandler, Fickr by Wikimedia CCA-BY-2.o Generic
"The propagandist's first requirement is to be heard," said Jacques Ellul in 1965.
Regardless of whether or not you've heard of Ellul, this observation ought to be self-evident to anyone who thinks for more than a moment about the matter.
Why then do so many media megaphones irresistibly remain servants of someone they also regularly describe as an outrageous liar? Why magnify manufactured outrage?
When facing any other serious threat, it would be a no-brainer to first remove the threat. And, to be fair, some media are making headway in countering propaganda, mainly by bringing us other wanted news.
By searching out lucid opponents whom any propagandist has, perhaps more yet will elaborate better and new visions for the future, without mention of the propagandist or his outrageous fantasies.
A wonderful quality of propaganda is how quickly it decays, when denied opportunity for a "refresh."
So much "news" is still slave to the gossip formulae, named by media analysts for years, of reacting to Disaster, Celebrity, Crime, Sex, and Violence. This is sad commentary on the lack of imagination of some media and media educators when thinking of their audiences.
After too many years of countless variants of this kind of verbal and nonverbal abuse, for sure, our household will not be alone in continuing to search out the better media options.
Happy New Year!
at December 27, 2020 No comments: 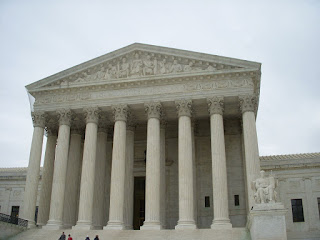 Supreme Court, Washington DC
photo credit: United States Government, Wikimedia Commons Public Domain
At the outset, just for the record, I'm committed to theory and putting theory to work. Yet, whether "relentless public scrutiny" is just a fallacy of political theorists is about to be clarified in the United States.
We're soon to see what happens to democracy too. Coming days, weeks and maybe years will produce an uncountable number of words about this. Whatever happens, divergent ideas of popular democracy, liberal democracy, and representative democracy will likely get thrown around with abandon.
Although what we mean by democracy is a legitimate concern, perhaps the more immediate question should be who will do something useful about two especially serious failures of theory?
Firstly, what will you do to push back on the too-frequent failure of the so-called "guardrails" of public accountability?
Perhaps someone can tell me where the prosecution of public corruption in the United States has recently worked effectively? Most often this appears no longer expected in this oh-so-sensitive-to-popular-sentiment political climate.
Are voters supposed to believe that the multiple statute books federally, for example, really lack "teeth" or require such difficult proof that prosecution really is worthless?
Proof of value should be performance in use, not leaving needed laws sitting in the statute books. Goodness knows there's been plenty of malfeasance and corruption to warrant prosecutions in recent times.
Political theorists continue to write about their interviews with leading political and government pragmatists. Then, they republish as largely unqualified "wisdom" what they're told about artifacts called "guardrails," which appear to be so valued that they can't be tainted by use.
Meantime, the numbers of whistleblowers and others leaving public service with careers and personal safety in tatters for speaking out just continue to soar.
If a law is not useful enough to be used, the time on theorizing could be better spent dreaming up some provisions that even flawed public figures would have to use - or else, spend some time dreaming up how such failing "representatives" of the public might be removed quickly but fairly by the population if they don't. Apparently, that's a problem worthy of a legal-political science equivalent of Einstein.
Secondly, what will you do to find and urge the elected politicians who do care to do something better, to help:
1. educate everyone about detecting and calling out propaganda;
2. codify remedies to the multiple deficiencies of norms and regulations to protect the rule of law; and
3. educate everyone about putting civics to use?
I'm sure you could add much to this list, as I could, but these are gargantuan enough for a start.
Here we all are now, stuck in the effects of blatant failures in accountability, and "we, the people" remain caught in the consequences of bad actors.
While such matters are still richly fermenting, before much further deluge of theoretical posturing, it's time to demand action.
at December 02, 2020 No comments: