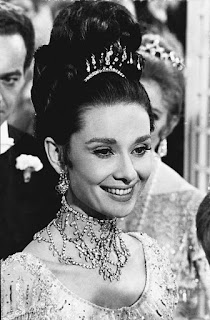 Audrey Hepburn for My Fair Lady
by movie studio, publicity photo. This image is in the Public Domain.

Way back when, Australian schoolchildren would challenge each other to spell what we understood was the scientific name for that unusual mammal, the Platypus.

By school-age, Aussie kids had sidestepped hazards beyond the schoolyard, surviving some of the world's most deadly jellyfish, sharks, snakes, spiders, and more. So, faced with the local version of a schoolkid jibe that somehow flew around the world before the Internet, the smart kids would reply to the daunting challenge of "Ornithorhynchus is a hard word, spell it," by simply answering "I...T," choosing to focus on the literal meaning of the sentence.

For anyone with an interest in words though, what words suggest, rather than what they denote, might hold special interest.

Pioneering professors of phonetics showed how we say more than what we literally mean in our choice of words. It was the character, Professor Henry Higgins, in George Bernard Shaw's play Pygmalion and Higgins's subsequent appearance in the Rodgers and Hammerstein musical version, My Fair Lady, that  popularized some wide awareness of how language choice and pronunciation marked class stratification. The character of Higgins was based in part on the pioneering, prolific but cantankerous British professor of phonetics, Henry Sweet.

For example, in the early twentieth century, European researchers speculated that a high ratio of nouns (and their related adjectives, articles etc.) to verbs (and their related adverbs etc.) might be a flag for people having some psychological challenges. Linguistic researchers have long noted that someone using many verbs versus nouns projected a more in-touch, vigorous personality.

Ongoing research has refined clues about noun/verb ratios and other language features, to help diagnose and treat some serious psychological conditions. In more recent decades, the computerized counting of word types, along with content analyses, have helped to extend the understanding of some effects from a variety of the accumulated language features.

We can all recognize the sleep-inducing effect of bureaucratic messages, with complex sentences and too much passive voice or past tense verbs. And, breaking an old grammatical "rule," what about the very great value of using the little word "and" to begin a sentence, or just more frequently--and connect thoughts, as we do in conversation. Jonathan Swift and some other powerful writers used "and" a lot, which helped to keep us interested in what they had to say, by making them seem more conversational. So, the revelations abound, when you realize what to look for.

Even a small variation from an expected style might have big effects. It was the researcher Mr E.H. Flint, in the early 1970s, who pointed out to our class that sentence fragments (a.k.a. non-principal sentences, to the traditional grammarian) uniquely occurred in the spoken language and not the samples of written Australian English that he was reviewing at the time.

The big deal he pointed out to us was how dramatically even a single sentence fragment in writing helped to create an informal, conversational effect. That President Biden used 38 sentence fragments in his Inaugural Address, as I noted in the previous blog post, had a really big effect.

I wonder what Mr Flint would have thought of the eminent British linguist, David Crystal's publishing a book with the title Txting: The gr8 db8, as long ago as 2008; much less the ongoing shifts in what we now consider formal or colloquial or intimate language.

Beyond the strengths found in how language choices influence what we think about the tone and style of a speaker or writer, there are even more enjoyments in these Elysian Fields--for example, looking at how word choice, sentence form, and passage construction "Xtra-verbally" influence the potency of emotional appeals, or the effectiveness of an argument, or other communication effects.

A field far from the Elysian Fields also contains the bad folks who continuously deny, distract, or delay, by putting the small word "not" in front, to say they are not advocating something or other, when they really are. As I've noted before, in relation to so-called "fact-checking," like most car drivers who genuinely don't see cyclists, we don't see the NOT and focus again on the lie; and when we repeat a statement from these folks, with "not" upfront, we're really helping to state what they said/the lie, again and again and again.

Then, to come right up to date, there's a whole other field of positive-sounding words like "Remember this day forever;" which, given the context, is quite the hyperbolic signal to strengthen commitment to nasty actions that I believe even schoolkids might know are NOT democratic.

Once we more consciously look at the meanings of words well beyond the "thing" or concept that a word represents, it's kind of like wearing X-ray glasses from science fiction--you might want to keep your vision adjusted and never want to take your new X-ray glasses off.

at February 10, 2021
Email ThisBlogThis!Share to TwitterShare to FacebookShare to Pinterest

I interviewed Crystal in Oxford for my MOOC! It’s on YouTube.

This post is so interesting, Rod. My grandchildren have just started VIRTUAL speech and drama lessons at the London School of Musical & Dramatic Arts (LAMDA), so perhaps their teacher will share Henry Higgins with them. I mentioned in a review I wrote last week of the making of the Macquarie Dictionary for The Conversation the fact that elocution lessons were part of my early training. I went on to become a speech & drama teacher and am enjoying immensely re-newing my love of poetry.

When I recently opened my copy of Austen's How to Do Things with Words, there on the flyleaf was stamped Flint, Dept of English, University of Queensland. I must have bought the book second hand at the UQ Alumni Book Fair some years ago. I certainly didn't borrow it from him and not return it. I remember Flint well. He had such an onomatopoeic name.

Much thanks, Roslyn. So delighted your grandchildren are following in your footsteps. Quite the coincidence on the Flint book. In lectures, he presented fresh insights continuously, literally from his research the night before, often handing out new research notes in lectures, still wet from his running them off on a spirit duplicator on the morning of the lecture. Another true scholar and Reader in medieval languages at UQ, Stanley Gerson alerted us to Sweet being the model for Henry Higgins. We used Henry Sweet's Old English primer.