What the Inaugural Address Means 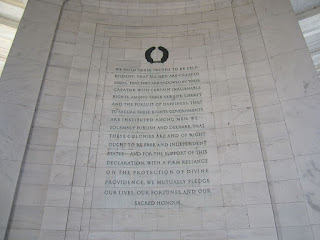 "We Hold These Truths" at Jefferson Memorial
by Billy Hathorn. This image is licensed under CCA-BY-3.o Unported.

The recent inaugural address of the new president of the United States was distinct in both content and style.

Most important was the outline of policies to reassert truth, law, and justice as national values. Importantly too, the language of the inaugural address signaled a novel integration of analytical and intuitive styles.

I was interested to hear this different language mix from President Biden, having just compared the language of the previous president with ten notable speakers from the 1890s to 1980. Compared with these speakers, the outgoing president had the most intuitive communication style.

In contrast, President Biden blended a mix of content and function words that reinstated an analytical communication style in the presidency, while also incorporating some language features that suggested an intuitive approach.

The speech was structured to logically address problems facing the nation and to offer solutions. Language features included a substantial number of complete sentences, low occurrences of non-referential adverbs, prepositions, and impersonal pronouns, as well as a strong presence of such common rhetorical devices as anaphora and other parallelism, antitheses, and other features that reinforced a conceptual, analytical communication style. It also derives some punch from a frequency of verbs and verbals, especially action verbs, infinitives, and participles.

The speech was delivered in a largely conversational tone. This combined with accumulations of many very short sentences, 38 sentence fragments, quite a few occurrences of "we/our" and imperatives, some questions, use of "and" to begin sentences and phrases, interpolations, and relatively few conjunctions, all helping to suggest an intuitive approach.

Why this matters is that, as mentioned in an earlier blog post, a study published by the National Academy of Sciences not long ago had noted a decline of the analytical communication style in American presidents and other English-speaking political leaders since about 1980. Apparently "voters are increasingly drawn to leaders who can make difficult, complex problems easier to understand with intuitive, confident answers."

Since the later twentieth century, mostly gone from popular taste are the long, grand rhetorical flourishes, replaced first by the conversational language and tones required on radio and television, then more recently by a snappy resonance demanded in social media.

After the perversions of brief and snappy into untruthful, illegal, and unjust, to deliver whatever is most outrageous, perhaps we are to see whether outrageous language might more often get shunted aside by a quieter rhetoric in an analytical communication style--which is buttressed with an intuitive approach.

Perhaps it's not a total pipe dream to hope that the mix of content words in the inaugural address that actually refers to people, tangible things, and real concepts might open the way for further, similar public communications that reference reality.

Can we even hope these continue to get some media attention, instead of the covey of "audience-tested" outrage words delivered into talking points and media releases that have become so common for too long?

at January 22, 2021
Email ThisBlogThis!Share to TwitterShare to FacebookShare to Pinterest