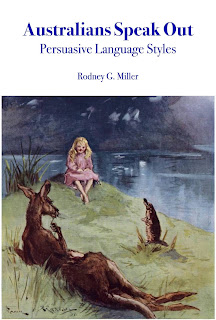 The Platypus sings of the antediluvian days
Kangaroo frontis by Unknown artist from Dot and the Kangaroo, 1899
This image is in the Public Domain {{US-PD-expired}}

or Ingram for libraries and bookstores.

“…designed to appeal to a broad audience interested in communication, rhetoric, and persuasive speaking… Australians who wielded their words as firmly and effectively as battlefield swords and guns …highly recommended, top-notch selection that belongs in the collections of a diverse set of libraries... Ideally, it will be used in classrooms and discussion groups as a solid example of language styles and effective speech.”

Full review here or search for book title at: www.midwestbookreview.com/mbw/jun_22.htm#dianedonovan

Roslyn Petelin PhD, Honorary Associate Professor, School of Communication and Arts, The University of Queensland and author, How Writing Works:

“A fascinating, monumental book that should be compulsory for all history and politics students and many others.”

*  *  *  *  *
True leaders advance the common good, using "...truthful, lawful, and just speech"--as recommended for more than 2,400 years.
My new book, Australians Speak Out: Persuasive Language Styles, assesses persuasive language styles in the speeches and writing of leaders in one modern nation, who got it right. These leaders had to speak directly, laconically at times, and use plain talk to hold the attention of audiences.
The book is packed with examples of how extraordinary speakers and writers use ordinary words to make representative democracy thrive. It assesses the persuasive language of some notable Australians, from the 1890s to the 21st century.
Living in the United States through the absurdity of the initial handling of COVID and a remarkable election, I kept some perspective by exploring a rich heritage of extraordinary Australians who advocate social and political change--completing the book while intense fights for democracy continue throughout the world.
Speaking Up
In Australia, where the anti-hero is revered, leaders have to speak up and speak out in individual ways. When the Olympics were held here, on the night before the race, the blue line marking the marathon course was erased from one section of the course--the next morning to be found repainted running up to one pub door and out from another.
It's the same nation where, amid the COVID pandemic early in 2020, photos spontaneously appeared on the Internet of suburban dwellers dressed in startling costumes as superheroes, zombies, grotesques, princesses, etc., just to roll out their wheelie garbage bins to the front of their homes for collection. Australians deal with the absurd with a developed sense of humour and a sense of independence.
At a time when truthful, lawful, and just speech is needed more than ever, the book takes a fresh look at how prime ministers, other community leaders, and advocates of change attract attention and move people to action.
Australians Speak Out ["Look Inside" here] reveals the persuasive language of notable Australians whose advocacy helped to
* federate the colonies of Britain in the South Pacific as one nation
* make Australian women among the first to be able to vote, in 1902
* appeal directly to the people of the United States for wartime support
* establish rights for First Nations
* challenge sexism
* reform laws to respect human rights
* control guns
* deal with the COVID pandemic
and advance many other causes by appealing to our reason and emotions. For ready access, a selection of notable speeches and writing is included.
Direct Appeals
Looking closely at the language of more than 20 notable Australians, who helped to transform the colonies of Britain into a multicultural nation on the world stage, brought surprises along with expected familiarity. Familiar now to relatively few is the plea during World War II to strengthen the partnership of the United States and Australia to defeat foreign aggression in the Pacific--from prime minister John Curtin, speaking via radio directly to the people of the United States.
Perhaps more readily recalled are prime ministers Sir Robert Menzies and Gough Whitlam, who respectively committed and removed Australian troops in support of the United States in Vietnam. Or, Germaine Greer provocatively addressing women's rights at the National Press Club in Washington DC in 1971--while promoting publication of The Female Eunuch, with the persuasive language that she used in her book reviewed here.
Advocacy for Action
Surprising to some might be the powerful language of Louisa Lawson's social activism, which spearheaded women's right to vote on the same terms as men in 1902; and yet peoples in the First Nations were unable to vote until 1962.
The disturbing treatment of First Nations was finally officially acknowledged during the term of the reform prime minister Gough Whitlam, elected in 1972, and in the landmark speeches of prime ministers Paul Keating (1992) and Kevin Rudd (2008). Yet, still unaddressed were key rights for First Nations strongly advocated from the late 20th century, by activists like Oodgeroo Noonuccal [Kath Walker] and Kevin Gilbert, whose speeches are reviewed in the book.
Also assessed are the remarkable speeches and writing of the former Justice of the High Court, Michael Kirby, who recalls the inspiration that Eleanor Roosevelt brought to schoolchildren through her visit to Sydney in 1944--and to his own life-long commitment of reforming laws to respect human rights. And, how The Right Honourable Lord Mayor of Brisbane, Sallyanne Atkinson, invited British royalty who were present to join Brisbane residents in "our party," to celebrate the City's coming of age at the opening of World Expo '88.
From more recent times, there are powerful, and perhaps surprising speeches. These include prime minister John Howard's address to transform gun ownership nationally, little more than a month after the Port Arthur massacre in 1996, and prime minister Julia Gillard's address to parliament in 2012 in her powerful objection to sexism, which resonated around the world--to current Prime Minister Morrison's brief but reassuring plan to deal with the COVID pandemic.
For anyone interested in a close look at words that appeal to audiences--that are authentic and move hearts and minds! I hope you'll enjoy reading the book.
at April 07, 2022 1 comment:
Email ThisBlogThis!Share to TwitterShare to FacebookShare to Pinterest
Newer Posts Older Posts Home
Subscribe to: Posts (Atom)