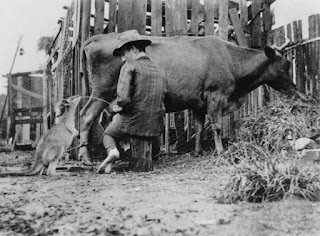 Wallaby appreciates milk directly from a cow
Thirsty wallaby on a Queensland Property by W. Matthewson & State Library of Queensland, Australia.
This image is in the Public Domain {{PD-US-expired}}

How delightful that we gained another hour of light at the end of today, thanks to "falling back" from Daylight Saving Time, in the United States anyway.

This bonus from frugality is a treat, especially if you've suffered through endless public wrangles sometime about the merits, or not, of setting the clocks forward in the Spring--to enable such generosity for this day in the Fall.

Tussles over the terrors of time adjustment can tear at local communities--some call theft what others call a gift of extra sunlight, to play or get extra chores done in daylight.

Everyone seems to have an opinion. In an early local debate in Australia, one of the louder advocates for not messing with Tempus Fugit was a politician who, as a former farmer, knew a thing or two about messing with "rules of nature." He was especially knowledgeable, he said, about when the cows expected to be milked!!

Amid others' commentaries were when children needed afternoon snacks after school, and, of course, the extra hour of tropical sunlight would fade the curtains.

You think I'm making this up? 'fraid not--perhaps you heard equally preposterous polemic pressing panic buttons locally in your community (but hopefully not).

During deliberations on so momentous a proposition, the media generously sustains ever-prescient insights about the pros and cons, seeking to elevate each skirmish of the debate into a gladiatorial battle. Rarely was so much expended by so many about so little, as for the potential losses and gains from adjusting just sixty minutes. And thankfully some playful commentators added parody and humorous quips to the debate.

This raging public discourse for the politician was, of course, more than harmless diversion. It was just one more of the many mock controversies he stoked. His polemic helped distract attention and energy from dismantling the gerrymanders and electoral malapportionment he'd quietly installed.

Frequently he was re-elected with a smaller number of votes than the state's two other major parties. He kept his leadership and his political party in power in coalition with one of the other parties--benefiting also from a preferential voting system. He maneuvered this with about 20 to 27% of the primary vote for five elections before defeating the "coalition party" decisively in two more elections. All this and more kept him in the driver's seat for almost 20 years.

Unfortunately, today's time adjustment doesn't provide an extra hour for voting on Tuesday... so, best plan now, which five people--neighbors, family, friends--you can help get to a voting booth (where this is still permitted by state law!!), to cast votes in the poll that matters.

at November 06, 2022
Email ThisBlogThis!Share to TwitterShare to FacebookShare to Pinterest

I do blame the short term (lack of any) thinking of much of the media and the 24/7 news cycle for the quality of the politicians we new have in the Western democracies. Personality attacks have taken the place of serious policy analysis over the past thirty or more years. Journalism used to be a profession many went to after experience in other fields, and not straight from tertiary training where one is taught sensationalist writing.

Thank you for your good wishes for the US election, which as you know will likely have ongoing repercussions for the world. Thanks also for your recollection on the curtain comment, which may have originated from a social commentator who became associated with the politician, although some comments via Google, and “The Spectator” as recently as 2017, still report it as his “gem.” The inescapable point is the politician used a wide range of virulent polemic, which his followers liked, and others disliked or found offensive, especially when used to attack people. Your point on his ruling in a coalition with another party is well taken. As you likely recall, his own party’s primary vote ranged from about 20 to 27 percent through five elections, before he defeated the “coalition party” decisively at the polls in the next two elections. I’ve adjusted the blog post accordingly on both points. Advocates of preferential voting might benefit from looking closely at how all this worked, or not, from 1968-1987 in Queensland, Australia. For the drivel in the media, I agree there’s shared responsibility. One suggestion puts much of the blame for this on politicians generally, and bureaucrats in some places, realizing in recent decades that speeches presented as extended media releases would get them some profile. Your observation about journalism education doesn’t align with my experience of these educators, at least back in the day. Also, there are too many examples of superficial or scurrilous media reports in earlier times to attribute what we’re often dished up now to the responsibility of recent journalism educators–especially since the often-romanticized system of cadet journalism continues in many places and journalists are only published or remain employed when sufficiently compliant with editorial priorities set by a media organization. Appreciate your taking time to share your thoughts.