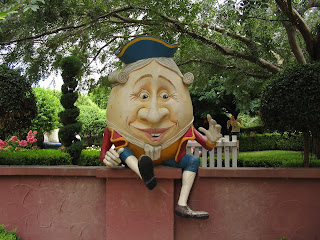 Humpty Dumpty
by Christopher Wood is licensed under CCA-SA 3.0 Unported

A foundation for a fair application of the law requires the interpretation of law and facts. How judges and juries interpret words, in statutes, or case reports, or the description of facts, is central to the effective operation of the legal system.

Recent articles which I'm grateful a friend pointed out, in Science and in the Harvard and Yale law journals, look at the varying ways that judges, juries, the legal profession, and everyday people interpret the meaning of words. It's perhaps no surprise that unlike Humpty Dumpty in Alice in Wonderland, for whom a word meant whatever he chose for it, the law seeks more consistency.

What should rock the legal profession and concern everyone is how much juries apparently can differ from judges about the meaning of words. It might be no surprise that how judges and juries interpret words can differ greatly. In any particular case, much less between successive cases, the character of language permits varying interpretations of meaning.

This is so, even with the efforts to apply the law's special rules that seek clarity and consistency, including various uses of "canons of interpretation, relevant context, or the text's purpose." In one of the articles, Kevin Tobia from Georgetown Law noted that Justice Frankfurter had remarked: "Anything that is written may present a problem of meaning... The problem derives from the very nature of words." People in general, as well as students of language, intuitively understand this.

And, so do others in the legal profession, which doubtless helps to add fuel to ongoing debates about originalism or other legal niceties of interpretation. Just two of the more interesting implications stimulated beyond these articles include firstly, how juries interpret deceit and secondly, the challenge to prove intent.

On the first for example, as I understand it, when deceit to enable an agreement arguably does not go to the heart of the contract, as well as in some other circumstances, juries that apply "commonsense consent," rather than some legal norms, tend to side with the perpetrator rather than the victim. Roseanna Sommers, from University of Michigan Law, explains the concepts, some psychological experiments that seek to explain such interpretations, and what this means for the law itself.

More broadly, the layperson's tolerance for deceit might also at least partly explain why voters will (re-)elect politicians charged with or convicted of criminal offenses; while such understanding is good to have, it's not any less disturbing, especially in the current context in the United States.

On the second challenge, as difficult as the tangled interpretations of consent continue to be, it could be helpful if the authors of these articles in the future paid more attention to intent; in particular, how the law's normative definitions for proof of intent cause trouble - especially in criminal law.

It's possible that any "commonsense blindness" to deceit might also contribute to the difficulties of proving intent in court. And, likely such "commonsense" fuels the more general tolerance of the fraudulent behavior of some public figures, who are perpetually engaged in attempted corruption of the electoral system and justice through frivolous litigation. Likewise, the difficulty of proving intent probably contributes to the failure to prosecute the bad actions of public figures, which debilitates representative democracy.

Let's remember that juries supposedly consist of everyday persons drawn from the community, on the democratic principle that any person's case should be judged by one's peers--as a holdover and ongoing symbolic and substantive statement of true populism over the monarchy or other autocratic rule.

Valuable as these articles are to anyone with an inclination toward the brain-bending needed for legal semantics, their largest consequences will probably emerge through teasing out further commonsense meanings in the interconnection of legal interpretation with people's lives.

The importance of the work of these scholars cannot be overstated. And, the concluding remarks of Sommers's longer 2020 article, at pp. 2306-7, are especially interesting perspective. Each author inherently puts in question some basic assumptions about the realities of how the law operates to benefit civil society.

at August 19, 2021 No comments:
Email ThisBlogThis!Share to TwitterShare to FacebookShare to Pinterest 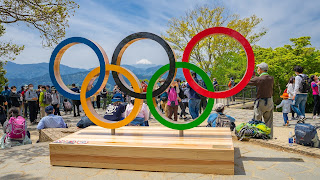 The Olympic torch is once more passed forward. Beyond conception as the world's must-see platform for competitive sports excellence, the Olympic Games reliably deliver much more.

For the days of the competition and well beyond, the events put a spotlight on the best of human qualities, not only sports skill, strength, endurance, courage, and more, but popping up regularly too are occasions that showcase a human sense of fairness and grace, and care for strangers and friends drawn from so many parts of the world.

Little wonder then that we're ready to experience the modern Games, bringing together, as the rings symbolize, five of the world's inhabited continents, when considering North and South America as one–in a competitive spirit that actually expresses tremendous cooperation among peoples of these continents.

Perhaps the enthusiasts who, regularly in southern-hemisphere summer, travel to the Antarctic to run a marathon will eventually find a way to help include this additional continent, with its too-little acknowledged 37 year-round scientific bases of non-permanent residents?

Against all impediments of difference, or dissent, or pandemic, a spirit of the ancient Olympics has passed forward for all of us, through generations of remarkable accomplishment by competitors, supporters, and organizers, well into our futures.

With Paralympians and the winter Games still to come, we can look forward to further reminders of some of the very best in people.