Why read? Why Write? 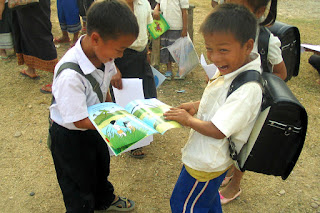 Two boys in Laos laugh over the book "What Can You Do with an Extra Dinosaur?", which one of them received as his first book.
photo credit: Blue Plover/Big Brother Mouse, Wikimedia Commons CCA-SA 3.0 Unported

Answers to "why write?" are probably as many as why we read. Whether from the spontaneous response "...because I have to" or answers more thoughtfully explored with authors, such as in the Paris Review Interviews, maybe not everyone will agree reading and writing are acts of thinking.

For example as LitHub noted just yesterday, Ray Bradbury had a sign over his typewriter which read "Don't think!" on the principle, he said, that "...you must feel. Your intellect is always buried in that feeling anyway." Perhaps the sign helped Mr Bradbury follow his own imperative; yet he seemed to feel his writing did also involve thinking and he was just urging against doing this consciously, avoiding a writer's sin of over-thinking.

And, of course, writing from the heart to the heart, even to move the mind, most would acknowledge as good advice. Whether we believe language is driven by thought or thought is driven by language, and whatever the debunkers of "book-learning" might claim, it's a no-brainer that the love of words is clearly important.

Yet, whether as reader or writer, consciously and/or unconsciously, I believe that we think. Yes, even when we're lost in the escapist fun of worlds that words create. Had Darwin attended to readers and writers as groups to classify, maybe he'd have seen this as a common basis for bundling "readers-writers" together as one group, or at least close to each other. Certainly, any writer is also a reader.

As children growing up, we might not get the significance of parents who encourage reading: the parent who reads a story or more every day or every night to a young child; the related behavior of giving books to one another in the family; and a parent's habit of just reading the news every morning, while not burning the breakfast toast. All are activities that influence how growing children come to think about a life that includes reading and writing.

I've yet to hear any decent case to deny on the weekend a child's habit of weekday reading at home after school; even if it means in the late weekend-afternoon disappearing from playmates or a family gathering for a while. The worlds of words explored, for many children, we know will shape occupational success. Importantly too, we see this habit enjoyed and it can help kids in lots of ways, setting a foundation that's passed forward.

When teaching writing with my former colleague Roslyn Petelin years ago, we were always surprised and more than a little dismayed that so many of our very bright first-year university students were starting a communication degree program, but could not write very well. Soon enough we redesigned the first-week's writing class to provide just a few introductory remarks, followed by a grammar test that also specifically sought thoughts about writing.

Year after year, what the students' test responses told us, both by their poor knowledge of grammar and by their shared thoughts about writing, was that while most wanted to write well their school experience had not adequately prepared them. Students had serious gaps in basic knowledge of conventional language use. Even knowledge of spelling, punctuation, or grammar was lacking.

In their earlier schooling, high-flowered "creativity" or plagiarism seemed then to be most often rewarded. Of course, as Roslyn and I acknowledged when sharing these issues at a National Reading Association conference, some students forget or didn't pay attention when language lessons appeared in their schooling, but the scale of students' ignorance and antagonism about writing was massive. This was especially so from the 1960s through the 1990s, in many countries. Importantly, the responses to the diagnostic test we administered also detailed the individual needs to address.

Using principles for teaching reader-based prose, we set clear steps for students to be able to communicate genuinely with people, as steps to write interactively. We focused ways to identify the key issues that concerned readers and applied a problem-solving approach to teach writing, which Linda Flower and others had developed.

In that other time in another country, what was not so evident was one of the greatest values of reading and writing. Today, the free inquiry that fuels reading and writing becomes even more pertinent as a re-run of McCarthyist-like outrage seeks to dominate the media and our lives in the United States. And, in any other countries where look-alike populist propagandists also twist words and thinking, seeking to undermine democracy.

While acknowledging the critical need for civics education and action, at least equally important is the very developed ability to think clearly, which comes from reading and writing. As Isocrates noted, "We regard speaking well to be the clearest sign of a good mind, which it requires; and truthful, lawful, and just speech we consider the image of a good and faithful soul."

Unless deeply into incantations or some propagandist's stimuli, we can feel secure that reading, writing, and simple dialogue will nurture free thought, which is how propaganda dies.

Many years ago, I read a study (I don't know if it was ever formally published) that asked what differentiated successful law students from those who failed to complete legal programs. At the time I was in a JD program (in the early 1970s), many law schools had failure rates that approached a third of the entering class, so predicting which students would succeed and which would fail was important to law school administrators. The study found only one general factor: the ability to diagram sentences was highly correlated with success in law school. When I was in junior high and high school (in the 1950s and early 1960s), diagramming sentences was always taught in English classes. I have no idea if that is true now. Sometimes functioning as an editor myself, I am surprised how often authors, and sometimes good authors, do not know basic parts of speech.

When I do executive search, I always ask the final group of candidates to read the scenario I provide and draft a letter of appreciation for a donor's gift. I ask for its completion by the next day. Everyone needs an editor, but if I ask for a rapid turnaround, I can often be assured I'm getting an unedited version of their work. The ability to write well is a bellwether of things to come.