Now Is the Time 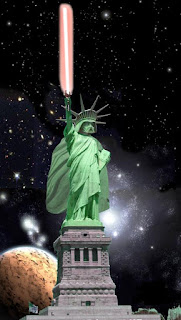 "Spoof of the Statue of Liberty"
by LeoFed. This image is in the Public Domain.

With anti-democracy propagandists still generally not held accountable, it seems one of the extra steps now needed to be able to vote in the United States is to check again that you are enrolled–well before turning up at the polling booth or mailing in your vote.

Best check now whether you're still enrolled. If not, you're not alone.

As the autocrats propagandize, "a lot of people are saying" that they are finding themselves unenrolled, or with changed party affiliation, or other new inaccuracies. One clue to this might be receiving mail from your local elections board at your address, directed to the "current resident."

Thanks to the continued adoption of the playbook of autocrats, it looks like "Darth Vader's" servants might be continuing to amp up the direct interference in the electoral process that's become a regular challenge elsewhere, especially for some European democracies.

For good reason, for example, the Netherlands has advanced most elections since November 2006 to be by paper ballot.