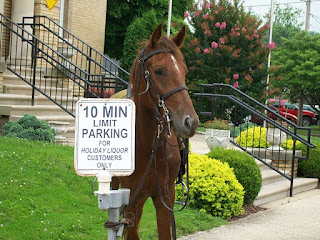 "A horse is tied to a 10 minute parking sign" by Charles Edward is licensed under CC BY-SA3.0 Unported
https://commons.wikimedia.org/wiki/File:A_horse_tied_to_a_10_minute_parking_sign_at_the_battle_of_Corydon_reenactment.JPG
A delightful book on The Language of Humour by Walter Nash just arrived in the mail. Worth every penny on the second-hand market, if you're prepared to risk never smiling again, after reading Nash's analyses of the joke, anecdote, pun, parody, humorous rhythms, overstatement / understatement / counterstatement, and all manner of funny-bone ticklers in-between.

My reward for buying second-hand, however, was apparently at the cost of some next generations of students at Villanova University in Philadelphia no longer having access to the humor and its principles in this slim book on their library shelf--as the stamp "NO LONGER PROPERTY OF..." that a librarian there in search of more shelf-space was obliged to announce inside the front cover.

Why this book is interesting is that for all the wonderful humor that keeps the world healthy and for all the descriptions of the effects of humor, we are less well served with explanation of the causes of humor.

For some of the more intelligent speculations about why we laugh, we have to reach back to the French philosopher, Henri Bergson, writing in 1900. He described his purpose in exploring humor as better understanding what it is to be human. He talked about many aspects, including the social role of laughter, the part played by exaggeration of human features, gesture and movements, and the relationship of the comic to human imagination.

Walter Nash's book is packed with a mix of examples of humor of course. One of the more famous being the restaurant diner asking, "Waiter, what's this fly doing in my soup?" for the Waiter's reply, "Looks like the breast-stroke, sir."--as an example of the pragmatic factor. Or an example of the bizarre pun, "What do you do with a wombat?--Play wom." In the interests of space, these are among the shorter samples.

The value of the book is not so much the examples, as much as the attempt at outlining some principles. Although published in 1985, for today's readers there might be too many historical (and not even hysterical) examples that relied on sexism or other appeals now considered inappropriate. Maybe this was the reason for my copy's removal from the university library's shelf?

Another limitation of the book is that it could do with more examples not so literary or Anglo-centric. Still, with so little of worth looking at humor, which is an elixir for so many of us sharing emailed jollies at this bizarre time, Nash's book is worth a look--if, like Bergson, you're interested in an important aspect of what makes us human.

One commentator on political humor, whom I read recently, suggested that a universal theory of humor is yet to be developed that takes into consideration three major theories, namely superiority, relief, and incongruity.

What's clear is that the human emotions behind humor remain a mystery and complex. Perhaps that's why at this time that the talk of public figures is so rife with blatant banality, as well as insult and injury of we the people; with some so lacking in empathy or other emotions we value, that we hear little or no humor from them.

Among politicians, who do you remember last able to make us laugh at all, much less for the right reasons?

at August 06, 2020
Email ThisBlogThis!Share to TwitterShare to FacebookShare to Pinterest

Humor is the unsung hero of building rapport.

I'm surprised at some of the books librarians choose to remove from their collection. Your example of the book on humour is a case in point.