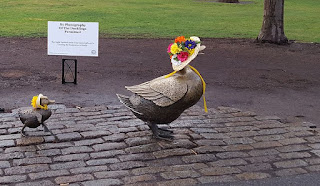 Once the glory day for pranksters, April Fool's Day seems to be less dutifully observed these days.

Sometimes the pranks are good-humored, harmless, and funny. Unfortunately, some cause an injury to feelings at least. Perhaps any decline in this second type might be welcomed as a change to human nature. Are we now any less inclined to find humor in the distress of others? Let's hope any injury is modest enough to easily forgive and soon forget.

Some April Fool's pranks live longer than others though. One radio broadcaster when I was growing up, appropriately and affectionately known to his listeners as "Bird Brain Bert Robertson," caught the wrath of city officials. One April 1st, he told his listeners that the City would soon turn off the water supply to all suburbs.

He so convincingly urged his large group of loyal listeners to get prepared for their day's domestic water needs by filling buckets, pots, sinks, and bathtubs, that the City's Water Commissioner asked Bird Brain to stop at once; the level of water in the Dam supplying the City was dramatically falling.

When Bird Brain informed listeners of their April foolishness, they delighted in his offbeat success and quickly forgave him. Regardless of the wasted water, for which he'd not be so readily forgiven today, the effect then was that Bird Brain's popularity rose further.

These days, a NOT-forgivable prank too often played out any day of the year is by some "bird brain" politician who dreams up outrage to get a headline.

As my grandmother would have said, tarred with the same brush, and even less forgivable is the media sub-editor who publishes the outrage [even if critical of it--please see earlier blog posts on the uselessness of "not" and so-called fact-checking]. And, LESS forgivable because the media sub-editor sets an expectation in journalists that "we the people" are willing to still be the victims of the sickness in those outrage pranks of a politician.

Little wonder that the residual effect of such foolishness in public communication is an appetite among some media gatekeepers for more foolish fiction. I guess this was what caused journalists to turn up recently to their first press conference with a new President to put questions with in-built potential to manufacture outrage.

These journalists' questions sounded eerily like they were distilled from partisan talking points; which themselves result from questions that media-manipulators put to members of focus groups to stimulate pre-determined foolishness.

Anyone who doesn't see this as truly bizarre, even without the other bizarre truth that political parties, media, and other companies actually pay money to support this whole set-up, needs at least another cup of coffee.

Also, little wonder then, that this charade of ever-increasing competition for media listeners is causing so many of us to find and enjoy other pursuits.

It's remarkable that such a tragi-comedy continues--a relic of a bye-gone era that was itself manufactured by media rating agencies.

Someone should point out that the world has changed.

As Rachel Maddow always says, "Watch what they do, not what they say." This truth should continue, though I expect there will be a lot more doing good and much less saying "watch me".