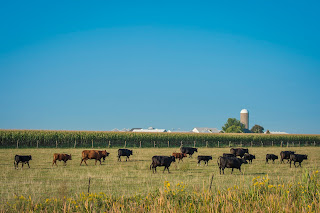 Cattle Graze in an Iowa Field
by Preston Keres/US Dept of Agriculture. This image is in the Public Domain {{PD-USGov}}

George Orwell concluded his Homage to Catalonia with a reflection on his return to England, "earthquakes in Japan, famines in China, revolutions in Mexico... [the people] ...all sleeping the deep, deep sleep of England… [will be] …jerked out of it by the roar of bombs."

This was 1937, when Orwell returned from a harrowing time as a volunteer in the fight against real fascists, during the Spanish War. Although it's not possible now to know just how, greater efforts at that time to weaken or defeat the fascists could have seen events from 1939 onwards unfold very differently.

It was not only England that was sleeping. Throughout a world still slowly recovering from a Great Depression, in rural areas, cities, and towns, people on farms and in offices and factories sought peace of mind for a better life--while leaders of the Axis Powers secretly made massive preparations for conquest.

Their first forays with bombs and troops were to take control of countries as staging areas for further conquest.

The world waited and watched from elsewhere, until the disparate and distracting debates, increasingly influenced by members of the Fifth Column telling smart-sounding lies, could no longer shield elected representatives from duty to protect homelands. Compelled by overwhelming circumstances, people worldwide progressively woke from sleep to harrowing years of action.

Foremost among what was different then was that Hitler from very early so completely lied about his intentions.

at March 05, 2022
Email ThisBlogThis!Share to TwitterShare to FacebookShare to Pinterest

Has not Putin lied about his intentions, or simply he ahs not told us the full truth?