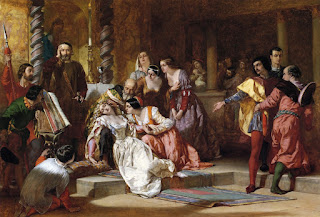 Shakespeare's play Much Ado about Nothing lightly explores human realities and impressions, delivering insights or delights about both. A good deal of repartee or turn-taking among characters in the play relies on verbs or verbal functions, to trigger the nuggets of humor or some wisdom--with quotable quotes like "...wooing, wedding and repenting is as a Scotch jig."

And this play is only one of the many places in literature, in history, and in life that the functions of verbs matter more than we might first notice. Verbs do much beyond what they denote.

From ancient to contemporary history, barbarians have peppered their propaganda with action verbs, seeking to be remembered as "Great," despite bloodthirsty conquests. In 480 BC Xerxes boasted in a tone too recently echoed, "My intent is to throw a bridge over the Hellespont and march an army through Europe against Greece, that thereby I may obtain vengeance..."

Regardless, history recorded a very large difference between the promise and performance, after Xerxes assembled his reportedly huge army and failed to conquer Greece. The famous historian, Herodotus, seems to consider Xerxes a superstitious and bloodthirsty fool. Just behind the veil of "greatness" that tyrants seek are the very real atrocities that their propaganda works to erase, with lies buttressed by strong-sounding language.

Likewise, we can all think of extraordinary speeches that use carefully chosen verbs to stimulate action or new ways of thinking, helping to propel special power in delivery that's long remembered--you cannot locate it and you cannot stop it (Emmeline Pankhurst), I have a dream (Martin Luther King Jr), let tyrants fear (HRH Elizabeth I), give me blood and I will give you freedom (Subhas Chandra Bose), give me liberty or give me death (Patrick Henry), ask not what America will do for you, but what together we can do for the world (John F. Kennedy), the land is our mother (Oodgeroo Noonuccal), we will not be quiet, we will not be controlled (Gloria Steinem), we have nothing to fear but fear itself (Franklin D. Roosevelt), we shall fight on the beaches (Sir Winston Churchill), the advertisements are for women (Germaine Greer), or a subtle use of the verb "to be," ...as is a tale, so is life: not how long it is, but how good it is, is what matters (Seneca).

We know verbs can help keep language lively and tell us much about the beliefs of a speaker or writer, including the stance on a subject, or any perception of us, the listeners or readers. Worth a look also is the ratio of "verbals" (verbs and their derivatives, like adverbs etc.) to "nounals" (nouns and their derivatives, like adjectives etc.), as well as the occurrences of the verb "to be," or verb pairs, or the infinitive, or the present tense versus other tenses, or passive voice, or the imperative verb--to name just some of the entrances to explore how verbs work.

And, verbs provide just one area of language to explore more closely, before venturing further into an Aladdin's Cave of the interesting ways of language--such as how function words, rather than content words, reflect thought and attention patterns, from which listeners and readers infer personal qualities, relationships, and types of formality or informality.

A good way to navigate language effectiveness though is to look for how verbs actually do more work for us than we might always consider.